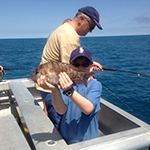 Port Phillip Bay is one of Victoria’s most popular tourist destinations and a substantial fishery for both commercial and recreational fishers. Conflict between fishery groups had been ongoing for some time and this project aimed to understand the full range of concerns that underpinned this conflict and develop a framework to assess social and ecological issues. In addition, this project undertook a qualitative ecological risk assessment and made recommendations for improved cross-sectorial fisheries management. These aims were achieved through literature reviews, stakeholder consultation including interviews and workshops.

Results revealed that the greatest concerns for all user groups were external to fishing and related to effects of pollution, land-based activities, and exotic marine pests on Port Phillip Bay’s ecology. The social research found that most of the overt conflict between users was restricted to a relatively small group of recreational fishers opposed to commercial fishers in the western side of the Bay, especially Corio Bay. The main drivers of conflict were perceived competition for particular species occurring in this shared fisheries resource (e.g. Snapper, King George Whiting, Flathead). The ecological risk assessment also identified that by far, the greatest risks to Port Phillip Bay’s fisheries were associated with ‘External Hazards’ (both in terms of the number and severity of risks) associated with population, catchment, industry and development impacts on the Bay. In contrast to external hazards, risks directly related to commercial and recreational sub-fisheries were assessed to be generally “Moderate” or lower consequence and were considered sustainable given current (at the time) management controls. Towards the end of the project, a plan to buyout existing commercial netting licences operating in Corio Bay by 2018, and throughout Port Phillip Bay by 2022 was announced. This removed the relevance of a planned project outcome of this project — to provide a management plan for resource sharing between commercial and recreational fishers. A range of recommendations for improved management of Port Phillip Bay’s fisheries were made.