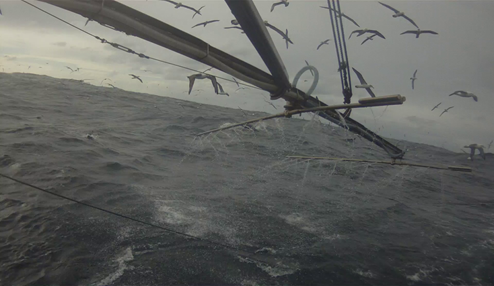 Seabird mortality because of fishery interactions is an issue of global conservation concern. Incidental mortality of seabirds caused by interactions with the warp wires of trawl vessels in Australia’s Commonwealth-managed Southern and Eastern Scalefish and Shark Fishery has been reported by on-board observers. This project was an industry-led study that developed and tested the effectiveness of two experimental mitigation devices for trawl vessels: a baffler and a water sprayer. These were tested against a control which was previously the only prescribed device (a warp deflector called a pinkie). Seabird interactions were observed during 69 shots comparing the sprayer against the control, and 55 shots comparing the baffler against the control. The seabird mitigation device employed alternated between the trial device (either the water sprayer or baffler) and the control device. Both experimental mitigation devices showed significant reductions in heavy interaction rates (interactions per shot) compared with the pinkie (83.7 and 58.9%). On stern trawlers, both new devices are deployed at the start of fishing and retrieved at the end of fishing operations, whereas pinkies need to be deployed and retrieved for each shot. This results in time savings and reduced risks to crew. Based on the findings from this study, the Australian Fisheries Management Authority now allows vessels to meet seabird bycatch mitigation requirements through use of either new device. The outcomes of this research and subsequent uptake of the new mitigation devices will greatly contribute to the reduction of incidental fishing mortality in Australian, and potentially other trawl fisheries.

Department of Agriculture Water and Environment